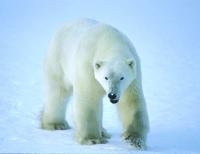 Polar Bear fur appears white or off-white due to translucent hairs (sunlight partially goes through them). Polar Bears have no shoulder hump and they have shorter claws and a longer neck than Grizzly Bears.

Status Report and Assessment of Polar Bear in the NWT (2012)