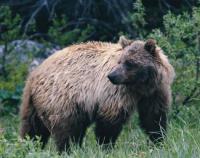 Grizzly Bears are larger than black bears and more heavily built. They can be recognized by their prominent shoulder hump, dish-shaped face and long claws. Colour varies from light gold to almost black, with pale bears being the most common on the barren-lands.

Status Report and Assessment of Grizzly Bear in the NWT (2017)

Clarification Regarding the Assessment of Grizzly Bear (2017)

Consensus Agreement on Not Listing Grizzly Bears in the NWT (2018)