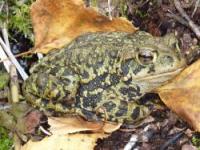 The Western Toad is a large toad with a light stripe down the middle of the back and small round or oval  ‘warts’ on the back, sides and upper limbs. Western Toads are usually green or brown, but their colour varies from olive green to reddish brown or black. Newly hatched tadpoles and toadlets are black.

Status Report and Assessment of Western Toad in the NWT (2014)

Clarification Regarding the Assessment of Western Toad (2015)

Management Plan for Amphibians in the NWT (2017)