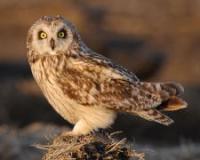 Short-eared Owls are light tan with wide brown streaks on their upper-parts and thinner well-defined vertical streaks on their breast and belly. There are black spots on the undersides of their wings near the wrists. They have small “ear tufts” and black bands that frame their yellow eyes. Short-eared Owls are about the size of a crow. Females are slightly larger and darker than males and have heavier streaking.