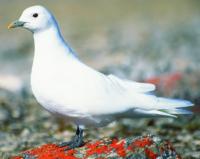 The Ivory Gull is a medium-sized gull that can be identified by its pure white plumage and black legs.