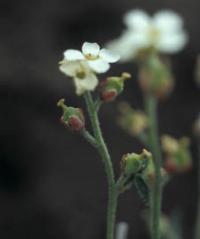 Hairy Braya belongs to the mustard family. The stems grow from a tuft of leaves at the base of the plant and have white flowers arranged in dense clusters. Hairy Braya is distinguished from other closely related species by its large flowers and the shape of its fruits (nearly round with very long "styles" (elongated reproductive structures)).

Status Report and Assessment of Hairy Braya in the NWT (2012)

Consensus Agreement on Accepting a Recovery Strategy for Hairy Braya (2015)

Recovery Strategy for the Hairy Braya in the NWT (2015)