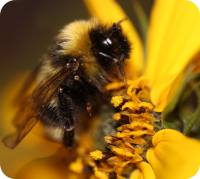 Gypsy Cuckoo Bumble Bee is a medium-sized bumble bee. The upper segment of the hind leg has a convex, densely hairy outer surface and lacks a pollen basket. Females usually have a white-tipped abdomen or at least a white patch on the back of the abdomen. Sides of the thorax are mostly black in both sexes. The Gypsy Cuckoo Bumble Bee can be distinguished from other cuckoo bumble bees found in the Northwest Territories (NWT) by black hairs on the top of the head; other similar species have pale hairs.

Check out the Field Guide to Bumble Bees of the Northwest Territories.