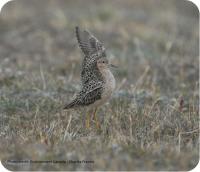 The Buff-breasted Sandpiper is a medium-sized sandpiper. Its head appears small relative to its body, and it has a short black bill and bright yellow-ochre (green-brown) or yellow-orange legs. Its neck appears long because of its small head and upright posture. It has a "buff" (pale peach or yellowy-tan) coloured breast and a mottled, dark brown and buff back that looks "scaly" because of the strong tone variation between these two colours.