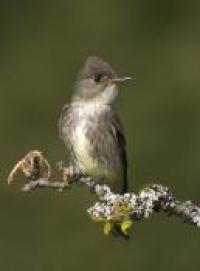 The Olive-sided Flycatcher is a deep olive-grey with a white breast and belly. The dark patches on either side of its white belly look like an unbuttoned vest. Its bill is short and stout, the top bill is dark and the bottom one is light with a black tip.