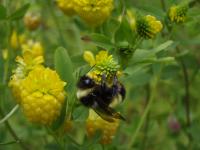 Yellow-banded Bumble Bee is a medium-sized bumble bee with a short head. It has yellow hair on the second and third segments of the abdomen, as well as a band of yellow hair across the thorax in front of the base of the wings. The rest of its body is primarily black, except for a fringe of brownish-yellow hairs on the fifth segment of the abdomen.

There are 24 known native bumble bee species in the NWT. Check out the Field Guide to Bumble Bees of the Northwest Territories