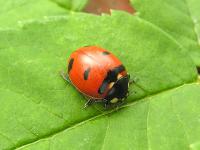 Transverse Lady Beetle is a small, round beetle that can be distinguished from other lady beetles by its colour pattern. Its wing covers are red to orange with black markings: a ‘transverse’ black band across the front and four elongated black spots toward the back. The head is black with two separate pale spots. The plate behind the head is also black with pale markings on either side.