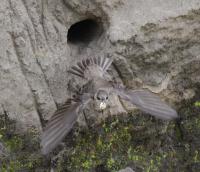 The Bank Swallow is a small slender songbird that can be recognized by its small head, thin wings and long, slender, notched tail. It has pale brown upper-parts and rump, white under-parts and throat, and a well-defined dark band across its chest. Males and females have similar plumage.