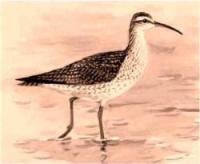 The Eskimo Curlew is a mottled brownish shorebird with long legs and a long, thin, slightly down-curving bill. It can be confused with its close relative, the Whimbrel, but is smaller (the size of a pigeon), has no barring or "stripes" on the under-wing feathers and its central head stripe is not as wide or well-defined.