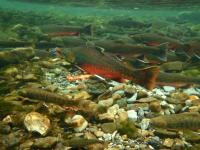 Dolly Varden exhibit a typical salmonoid body shape with large eyes below the top of a round, medium-sized head. Juveniles are brown coloured with a whitish belly, with small red spots and rectangular marks on their sides and back. Adults have small, pale pink or red spots, with surrounding bluish halos. Spawning sea-run males are brightly coloured and develop a hook on the lower jaw, while females, non-spawners and freshwater males are more muted in colour.